Celebrating Black History Month with Charlie Christian and his electric guitar that changed the music scene.

Written by Mark Glotzbach, Follow his own blog @markglotzbach

The information in this article was gathered from PLAY IT LOUD a book about the history of the electric guitar by Brad Tolinski and Alan Diperna.

“Who the hell wants to hear an electric guitar player,” said Benny Goodman, head of one of the most popular orchestra’s of the 1930’s, to his talent scout, John Hammond. That may seem like a ridiculous question now, but at the time the guitar was unpopular compared to woodwind and brass instruments that could really bring the swing. But all of that was about to change.

Before Michael Jackson moon walked across the stage, before The Beatles were chased down streets by screaming teenage girls and before Elvis gyrated his hips causing grown women to faint, there was Benny Goodman, his clarinet, and his 14 piece orchestra.

In 1936 Goodman and his band had 15 Billboard Top 10 hits. In 1937, 21 thousand young people filled the Paramount Theater in New York to see the Benny and his band. The New York Times had called the event a “riot.”

Goodman became known as the King of Swing, but as other orchestras began to rise to Benny’s challenge, he lost three of his key performers, leaving him no choice but to send John Hammond to find the next big thing.

Hammond recognized Jazz music as a product of African American creativity, and greatly preferred to hire black musicians. Hammond later said “To bring recognition to the Negro’s supremacy in jazz was the most effective and constructive form of social protest I could think of.”

Hammond was one of few white record executives to be trusted by black musicians, which led jazz painist Mary Lou Williams to urge him to hire twenty-two-year-old Charlie Christian who was on the rise in Oklahoma.

After hearing Christian play an improvised solo on his Gibson ES-150, Hammond excitedly called Goodman to tell him he found his next star.

The impatient bandleader responded, “WHO THE HELL WANTS TO HEAR AN ELECTRIC GUITAR PLAYER?”

“I don’t know,” Hammond replied, “but you won’t believe him until you hear him.” 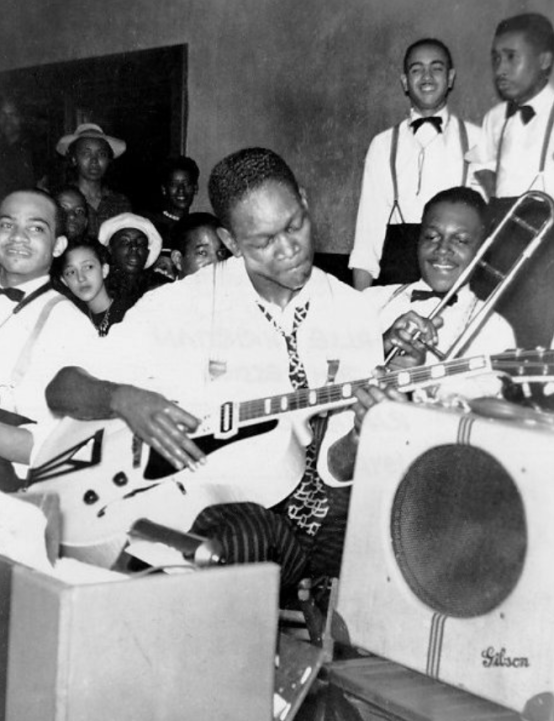 Charlie Christian was born to a poor, but musical family on July 29, 1916 in Bonham, Texas. His father Clarence had soon after lost his sight and moved the family to Oklahoma to gain support from some extended family.

Clarence would take his sons to play music on the street, something young Charlie had always enjoyed. Unfortunately, Clarence passed away in 1926, leaving his guitars to Charlie. Charlie dedicated himself to his art, studying theory with local Jazz musicians by the age of 13.

Charlie would skip school to play guitar on the streets to make money. Although the guitar wasnt a popular instrument among serious musicians of the time, Charlie thought it was perfect for playing on the street, he could play all the popular songs and it’s light weight allowed him to dance as well.

By 1934, eighteen-year-old Charlie Christian was performing at local clubs, and was inducted into the local jazz society, a group of musicians that would have late night jam sessions turned into musical battles between top musicians in ballrooms, public halls and even hotel rooms.

It was at one of these fierce late night jam sessions that Mary Lou Williams witnessed Charlie Christian defeat nationally-known guitarist Floyd Smith. This event would be the catylyst that jump started his career.

Charlie Christian auditioned for John Hammond and after two weeks of anxiously waiting, he received a telegram that read:

COME AT ONCE. HAVE POSITION WITH BENNY GOODMAN.

Christian reportedly sat down and started laughing upon receiving the good news. “That man’s in Los Angeles. How in the hell am I going to make it to Los Angeles if I ain’t got no cab fair,” Christian said. Hammond convinced Benny Goodman to use his radio budget for guest performers to fly Christian to LA.

Christian was nervous to audition for Goodman, afterall, he was one of the biggest musical acts of the time and was known for his impatience. Christian told Metronome Magazine,

“Benny sent everyone home from rehearsal, and then asked me to play for him. So there we were, just the two of us, and I was so nervous with him just sittin’ there and lookin’ at me. I couldn’t hardly play at all.”

Hammond was upset to hear of Christian’s botched audition, but desperate to save the young guitarist’s career, Hammond pushed Christian on stage during an intermission of the band’s performance. Benny was not happy to see the guitarist at the bandstand upon his return, at which point he called out, “Rose Room,” a song he was certain Christian would not know.

Unknown to Goodman, Rose room was a favorite of the young guitarist and he preceded to play his heart out. Goodman was shocked, and Christian was hired.

Within three weeks Christian was a star, thanks to Goodman’s busy performance schedule. Within five months he was voted Downbeat Magazine’s #1 guitarist.

Despite all of this buzz, segregation was very much the reality of the time, but Benny Goodman had no patience for people treating his black musicians any different than their white counterparts.

“I wasn’t worried about going south with Benny,” said Lionel Hampton, a Black vibraphonist for Goodman, “people said to me ‘Why you going down South? Those white folks will kill you.’ And I’d say, ‘They’ll have to kill Benny Goodman first.'”

When the band went to play a show in Texas, Goodman made sure all of his musicians would stay in the same hotel. He was even known to wack a racist with his clarinet if they dared to say anything prejudice in his presence.

After Benny Goodman and the band took a brief hiatus for Goodman to receive a surgery on his back in 1940, they reassembled in New York City. This would be a blessing and a curse for Charlie Christian Aside from Benny Goldman’s demanding practice schedule, Christian would spend his free time jamming in clubs, most famously Minton’s Playhouse, where Thelonious Monk was the house-pianist. This had began to take a toll on the young guitarist’s health.

In June 1941 Christian collapsed on tour in the Midwest and was rushed back to New York. His tuberculosis had returned. While he was recovering in the hospital, friends would sneak girls and marijuana into his room to cheer him up.

In January 1942 Christian received news that he had won the Down Beat poll for the third year in a row; the last good news the guitarist would ever receive. Charlie Christian, the first guitar hero, passed away in March from pneumonia at the young age of twenty-five.

Charlie Christian rose from making less than eight dollars a week to 200 dollars a week. He went from pan handling on the streets to playing the largest ballrooms in America. He was truly an influential musician and an inspiration for aspiring guitarists during a time when nobody wanted to listen to an electric guitar play.

Here is what many people to be Charlie Christian’s finest track, “Solo Flight”

You can also find more music by Charlie Christian on Spotify.